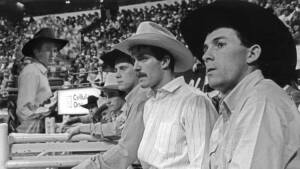 Craig Michael Latham crossed over to Heaven on Friday, October 8th, 2021 at Gilchrist Hospice Center in Towson, Baltimore County, Maryland after a long, brave and gracefully fought battle with cancer.

He was born on April 13, 1967 in Casper, Wyoming to Paul Latham and Joyce Reculusa. He grew up on the Red Fork Ranch west of Kaycee, Wyoming with his Grandad Norris, his Uncle Kenny and Aunt Cheri, and his brother, Deke. Red Fork is where he learned numerous life lessons and perfected his skills as a bronc rider that later led to success in and outside of the arena. As a child he spent his time horseback on the mountain or fishing in the creek with Deke. He attended grade school and high school in Kaycee. He then attended Eastern Wyoming College in Torrington, Wyoming where he met his future wife Lori Hart. Craig finished his higher education at Oklahoma Panhandle State University in Goodwell, Oklahoma where he settled and made his home for the past 35 years.

Craig and Lori were united in marriage at the Oslo Lutheran Church in rural Hansford County, Texas on Valentine's Day of 1990 and to this union two daughters were born....Chaney Hayes and Sadie Mae. Craig and Lori raised their daughters on their small ranch south of Goodwell.

Craig made his mark in the arena in the saddle bronc event at every level. He won several high school and college titles, PRCA Saddle Bronc Rookie of the Year and qualified for 9 trips to the National Finals Rodeo. He was a class act and a humble rider.

When Craig retired from riding saddle broncs he did not retire from the rodeo arena. In 2002 he took the reins as head coach of the Oklahoma Panhandle State University Rodeo Team in Goodwell. While there he guided the team to two national team titles and numerous individual event titles. He coached there until 2015 when he had to retire due to his health. Recently he helped as the rough stock coach in Borger, Texas for one of his former students.

The rodeo titles won were many and impressive but not nearly as important to him as being a good husband, father, grandfather, friend, and coach. Be a good person and help as many people as you can is the motto that Craig lived in his daily walk through this world. The way he lived his life and cared for those around him had a profound affect on the lives he touched.

He is preceeded in death by his brother, Deke Latham and his father, Paul Latham. Survivors include his wife, Lori Latham of Goodwell - daughter Sadie Latham of Kaycee, Wyoming & daughter Chaney and husband Tyrel Larsen as well as grandsons Charlie and Waylon Larsen of Weatherford, Oklahoma. His mother Joyce Reculusa and husband Joe as well as brother Scott Reculusa all of Kaycee, Wyoming. He also leaves behind a multitude of family and friends throughout the country who will miss him dearly.

A celebration of Craig's life will take place Monday, October 18th, 11:00 am at Oklahoma Panhandle State University in Goodwell, Oklahoma. Dinner will follow the service that afternoon. All friends and family are then invited to join us at the Rodeo Building at the Henry C. Hitch Arena in Guymon Monday evening to visit, share stories, sing a few songs and drink a few beers.

Eventually Craig’s ashes will be spread at his childhood home on the Red Fork Ranch right next to the creek where the fishing is good. We have no idea how to live this life without him in it, but we are truly blessed and thankful that he was ours to love in this lifetime and for eternity. Thank you to all family and friends who shared their lives with him. We appreciate you all so very much.

Friends and Family may sign the online guest book or leave an online condolence.

To send flowers to the family or plant a tree in memory of Craig Latham, please visit our floral store.

A Memorial Tree was planted for Craig

Join in honoring their life - plant a memorial tree